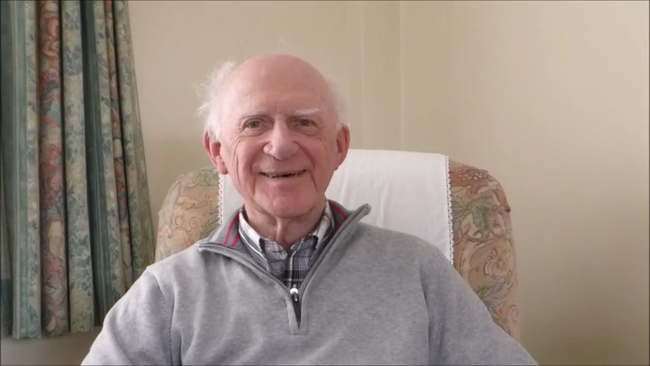 My name is Eric Renouf and I was born in Guernsey. I was eight years old when many of us were evacuated from the island Guernsey, the second biggest island in   the Channel Islands. World War 2 started in 1939 and by 1940 the Germans occupied much of the continent of Europe and were fighting their way across France towards the English Channel.

The Channel Islands were in danger of being attacked and occupied by the enemy.  It was decided that women and children had be evacuated. Here is the headline in the Guernsey Press on 19 June, 1940.

Here are extracts from the notice sent on the same day to every family in Guernsey,  giving one day’s notice of the offer of evacuation to England.

My brother Ken and went to our school on the morning of the 20th but we were told to return home till the next day when we were evacuated from the island. I remember very little about the voyage to Weymouth. I’d never been to England before but have only vague memories about our journey – wearing life jackets on the boat – and, my first time on a train – pressing my nose against the window to see what I could see (nothing!) as we travelled somewhere through the night.

Mum and our youngest brother Rodney left the island on another boat.  Dad, like most of the men stayed on Guernsey, as did my grandparents. Hard for everyone!

From Weymouth the train took us to Manchester and our Guernsey school stayed in Eccles for two weeks, then in Heswall in Cheshire.  My mother and youngest brother were evacuated from Guernsey later on the same day on another boat, and then went by train to St Helen’s. A month later my brother Ken and I were taken to be with Mum and Rodney who were billeted with a family who agreed to take in evacuees.  After twenty months with them, our Mum was able to rent some rooms in another house in St Helen’s and we four lived there for nearly a year.  Then we moved to be with my auntie and her three boys who also were evacuees from Guernsey, living in Brighouse, Yorkshire.  I was the oldest of the six boys.

Soon afterwards I passed the scholarship exam to be in our Guernsey Intermediate School for Boys which was based in the Hulme Grammar School in Oldham, Lancashire.  Boys were billeted with local families during school term time but went to be with parents for school holidays. This school photo was taken in 1944, at the end of my first year. (I’m far left in front row. )

Life ‘up North’ was very different from Guernsey where our biggest ‘industry’ was agriculture and horticulture; small farms with their Guernsey cows, and ‘greenhouses’ for growing tomatoes. In those days Oldham had many mills, all with their tall chimneys belching out lots of smoke and soot. The way I spoke also changed in my five years in ‘up north’:  Instead of speaking both Guernsey French  patois and English I soon  lost my Guernsey patois and developed a new mixed patois of  Lancashire  and Yorkshire accents!

Red Cross messages, 25 words maximum, once a month, were the only way we had contact with family in occupied Guernsey. Here is one example, my dad’s message to me and my reply to him which reached him about ten weeks later.

The war in Europe ended on 8 May, 1945 and this year we are celebrating the 75th anniversary of that big event in our history, even with a national holiday on May 8th.  The Channel Islands were liberated on the next day, as appears in this bigger form of the picture I’ve shown you before, but this time including the historic dates.

The British army landed at St Peter Port harbour on the morning of May 9th 1945,as this memorial stone by the slipway of the old harbour states:

The British army then had to guard the German prisoners-of- war and clear the mines from the beaches and the sea around the islands.  They had to remove ammunition from the many towers and block houses that had been built as part of their ‘Atlantic Wall’ by the German forces during the five years of occupation, and generally make the islands safe for the civilian population.  So it was several months before evacuees could return to their homeland, but we could then write letters!

My brother Ken and I left Oldham with our Guernsey Intermediate School for Boys on August 15, and stayed for the weekend in London – my first time there and with memories of seeing many bombsites and damaged buildings – and arrived back in Guernsey by sea on 18 August.  I remember joining in as we boys ‘booed’ the  German prisoners-of-war who were assisting in making the harbour safe. Also, I remember my first view of our dad through barbed wire near the weighbridge at the road entrance to the harbour.

My mother and youngest  brother Rodney could have returned with our school but she decided bravely to stay and look after my auntie (who was ill) and her boys till they could all return to Guernsey on October 13. That long delay in their return must  have been hard for both my parents, but it did give Ken and me a chance for dad and us two boys to get to know each other again after the five years apart. But it was a happy day for all the family when Mum and Rodney returned to Guernsey and we were together again as a family.  We thanked God for all his care through the years!

Every year since 1945 in all the Channel Islands, May 9th has been a public holiday, with special church services, carnival processions, loads of flags and bunting and many other festive ways of marking that important day of liberation.  Here are some photos from two of those anniversaries.

1. A view of the High Street decorated for the 67th anniversary.

2. That picture again, part of a First Day Cover for the 3rd anniversary.

There’s a verse of a hymn that I remember singing during World War 2  that  many people  used to find helpful.  It’s a verse in which we say that something scary is

happening.   But, at the same time it points to a way of trusting God to help us and others to find a way through to something better. Here’s the verse.

Holy Father, in your mercy,

When you or those you love are going through bad times, it’s worth remembering that Jesus said that God cares for us.  That trust can keep us going even when the going is tough, like it is now because of coronavirus or other  things. God bless you.

Unfortunately not the ones with chocolate chips.

Some cookies are necessary in order to make this website function correctly. These are set by default and whilst you can block or delete them by changing your browser settings, some functionality such as being able to log in to the website will not work if you do this. The necessary cookies set on this website are as follows:

Cookies that are not necessary to make the website work, but which enable additional functionality, can also be set. By default these cookies are disabled, but you can choose to enable them below: